We have recently discovered Pho - Vietnamese Noodle Soup.  While we were in Texas, we went to a restaurant that had the BEST Pho we've ever tasted!

We also went to a Ramen restaurant, which was not your typical packaged ramen.  Very good, but I prefer the Pho.

When we got back from our Texas trip we tried Pho at a place close to home and it was quite a disappointment.  So naturally, I went on-line to find out how to make Pho myself.

After gathering all the ingredients, I now understand why it is a pricey dish to buy at a restaurant.  We've paid anywhere from $8 to $12.  For a bowl of soup.  Very aromatic, tasty soup.

My first attempt was "okay", but I learned that I need to use triple the amount of beef bones to create the broth.  I had only used one lb. and definitely needed 3 lbs.

First I boiled the bones for 15 minutes, then rinsed them well and added them to a clean pot of boiling water.  Then added the vegetables and spices.  Here's the broth coming back up to a boil: 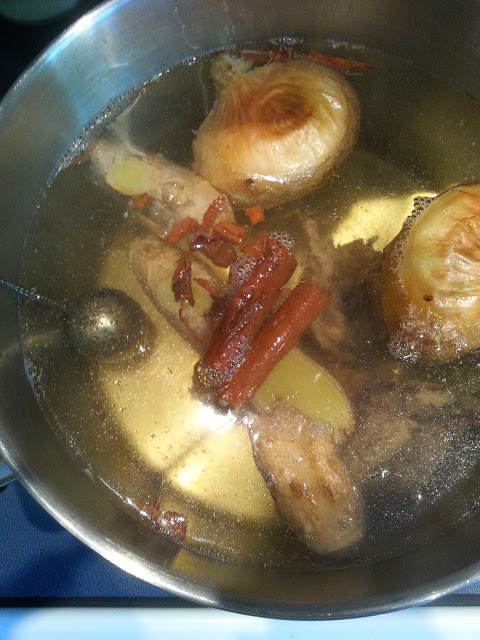 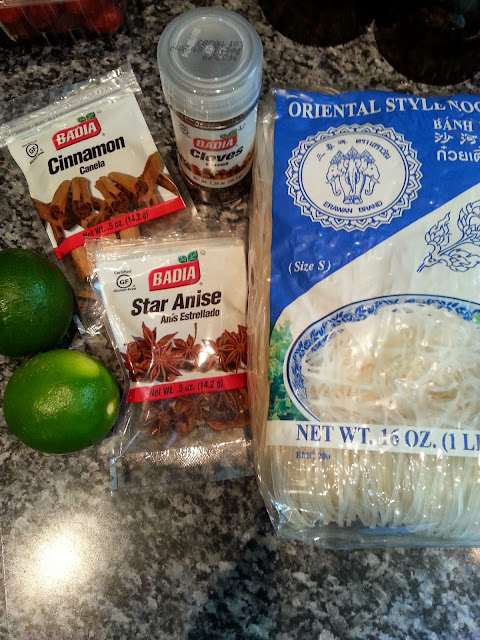 The smell while this was simmering was AMAZING!

The problem I hadn't anticipated was that since the bones need to boil for 3 hours, it reduces quite a bit and I had to add water a few times which diluted the broth.  Using 3 lbs of bones would fix that problem.  Lesson learned!

I've been advised that next time I make it I'm to add the cilantro and green onion while simmering the broth.

Once I perfect the broth, I'll be making a large batch so I can can it.  That will be amazing to have Pho whenever we need a Pho fix!