We had a wonderful cool front come down into SW Florida for the weekend. Back down into the 70's yesterday and today.  What a relief.  It's been pretty sweaty outside the past few weeks, into the 90's.  Ugh.  Sooo not ready for summer weather yet.

I had cleaned out the failed corn patch last week so I planted more moringa tree seeds, pigeon pea seeds and filled in the rest with vegetable amaranth seed.  I'm hoping these will grow well here.  The pigeon peas, once started, should do fine. There are two plants already about 6 inches high from seeds planted a few weeks ago.  The Moringa is a bit sensitive until it gets about 2 feet high, so those will need tending for a little while.  The vegetable amaranth seems to do well just about anywhere, but since this is a bit shady, it will be a good test for these as well.

I cleaned out the old pea patch yesterday and found a LOT of worms!  Woo hoo! I have carrots growing on the other side of that garden and I missed thinning a few so I gently pulled those out and replanted them.  Hopefully they'll make it.  If not, they were destined to be culled anyway.

I was trying to identify a weed that's growing like crazy all over the back yard and was searching Green Deane's "Eat the Weeds" website.  It wasn't there, but I got sidetracked and spent quite a while looking at all the edible weeds.  If you haven't visited his site, give it a look-see!  I looked at his post on Moringa, and was surprised to see that his grew way faster than he expected.  Apparently my crap soil keeps them from getting out of control.  Sadly.  Which is why I'm experimenting by planting seeds in the ground in various locations as well as in pots.

Oh, so back to the weed.  I did identify it, but through a different weed ID site at University of Florida.  It's "Wandering Cudweed" or "Pennsylvania Everlasting". According to this article it's a host plant for the American Painted Lady butterfly. Who knew?!

It sort of looks like a miniature mullein.  Unattractive little flowers on top.  There are over a dozen plants just in this one shot.  It's a bit out of control!  But since it might bring more butterflies into the yard, I'll need to let it do its thing in the back part of the yard.

I watched a video of a guy who chews the leaves of this weed (although he didn't chew it on camera I noticed!) and apparently it forms a wad similar to chewing tobacco or gum which you can chew for quite a while before spitting it out. Hence the name "cudweed" apparently.  Not so sure I'd give this a try since it's a very unappealing looking plant to begin with.

This is the other weed I did some research on. 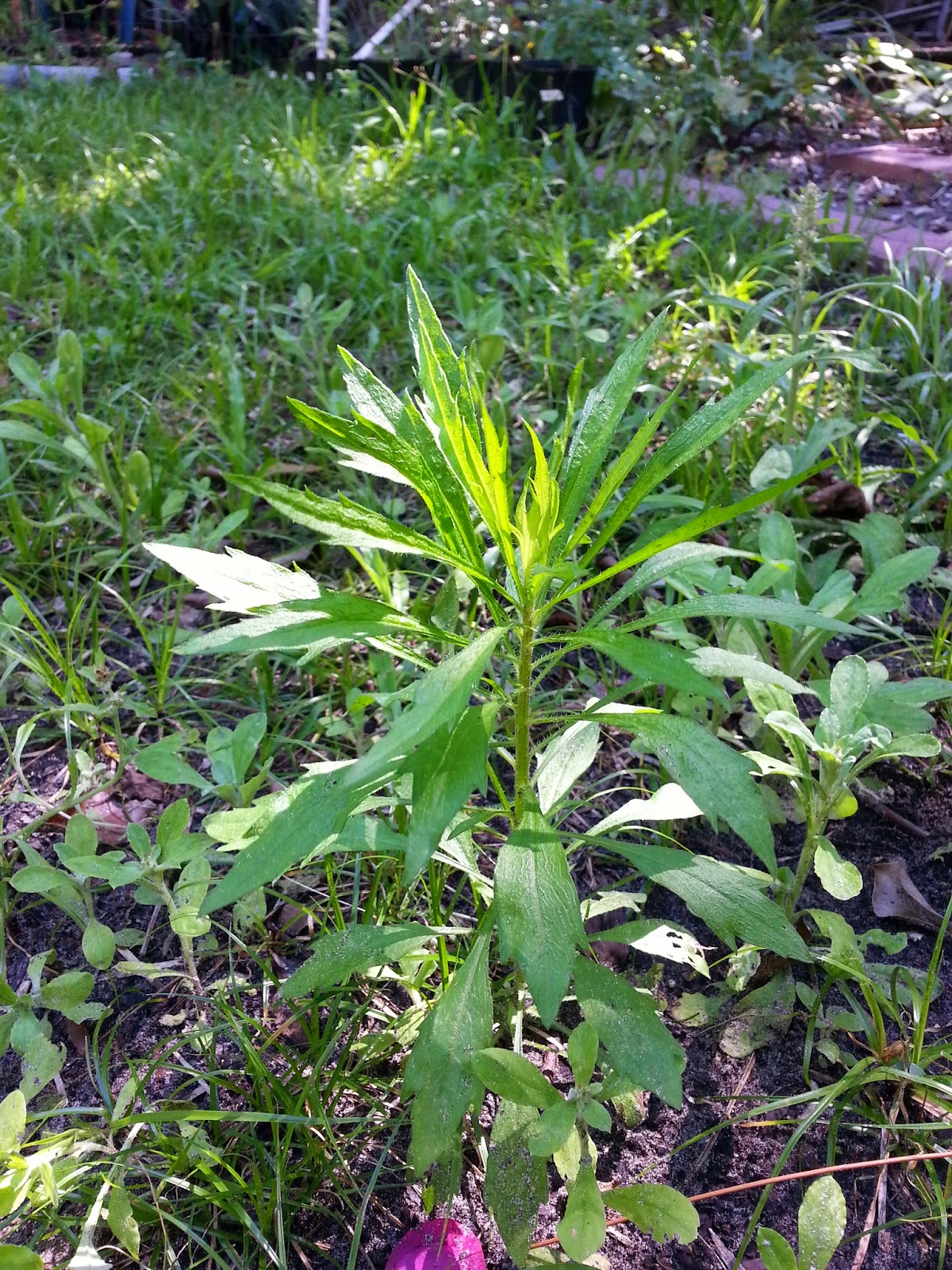 I'm fairly certain it's Horse Weed but haven't found sufficient evidence to confirm that. Not sure if it's useful or not but for now, for fun, I'll probably let it grow taller and/or to the blooming stage, which should confirm its identity as Horse Weed.

I weeded out about a foot of the "gaillardia" patch (left of the 2X6) to make room for a wider board which I'll use as my "path" between garden spaces. 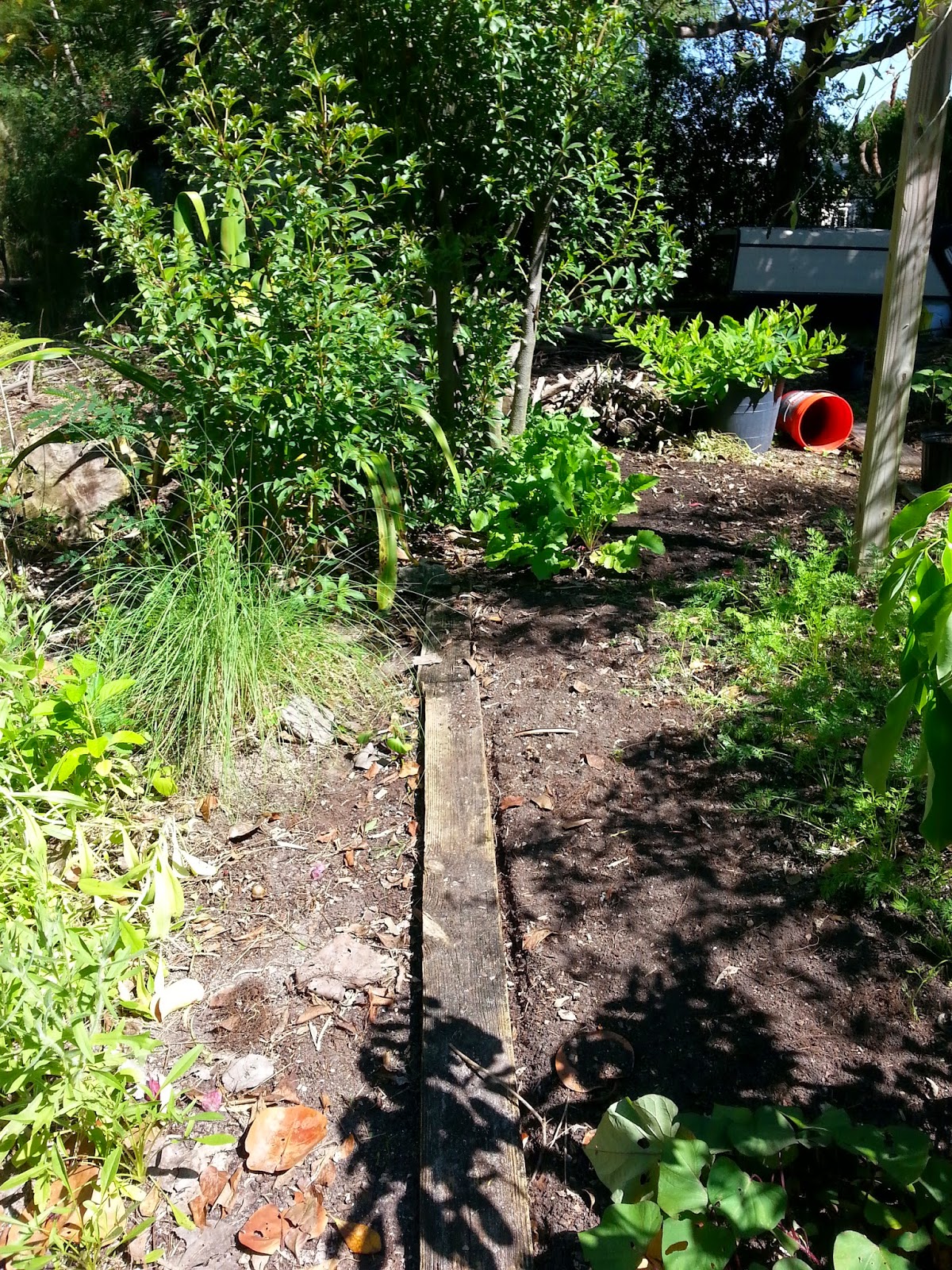 The right side was my (failed) experimental English pea patch.  Once I finished weeding the gaillardia out (or dig them up and move them), I plan to add more green beans here.

Didn't get as much done as I should have, but it was fun all the same.