I bought leeks a few weeks ago for the first time ever.  I had leek and potato soup at an Irish Pub and wanted to try making it at home.  It was so so.  I'll try a different recipe someday soon.  Whenever I buy green onions, I plant the root in the garden.  Just plunk them in here and there.  So I did the same with the leeks and I'm amazed at how well they're doing! Check this out: 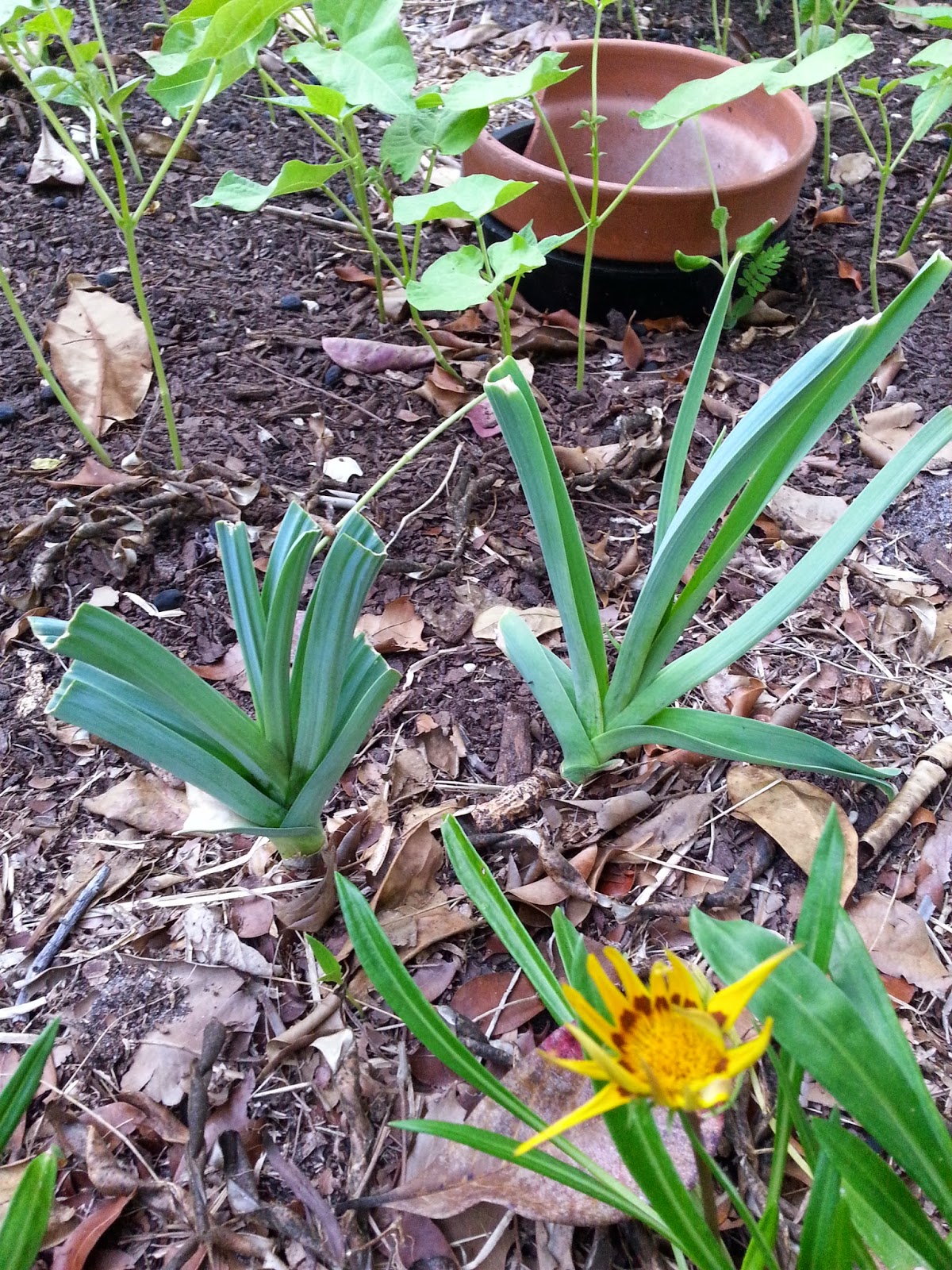 I'm not sure they'll amount to much, but they sure have grown a lot since I cut the stem off.

I haven't been out in the yard much over the past week since it's usually dark when I get home, even with the time change, but I got off work before dark today and was able to do a walk-around.  I was surprised to find an eggplant growing.  I thought it had fallen off:

I'm pretty tickled about this discovery - my longevity spinach is getting ready to flower! 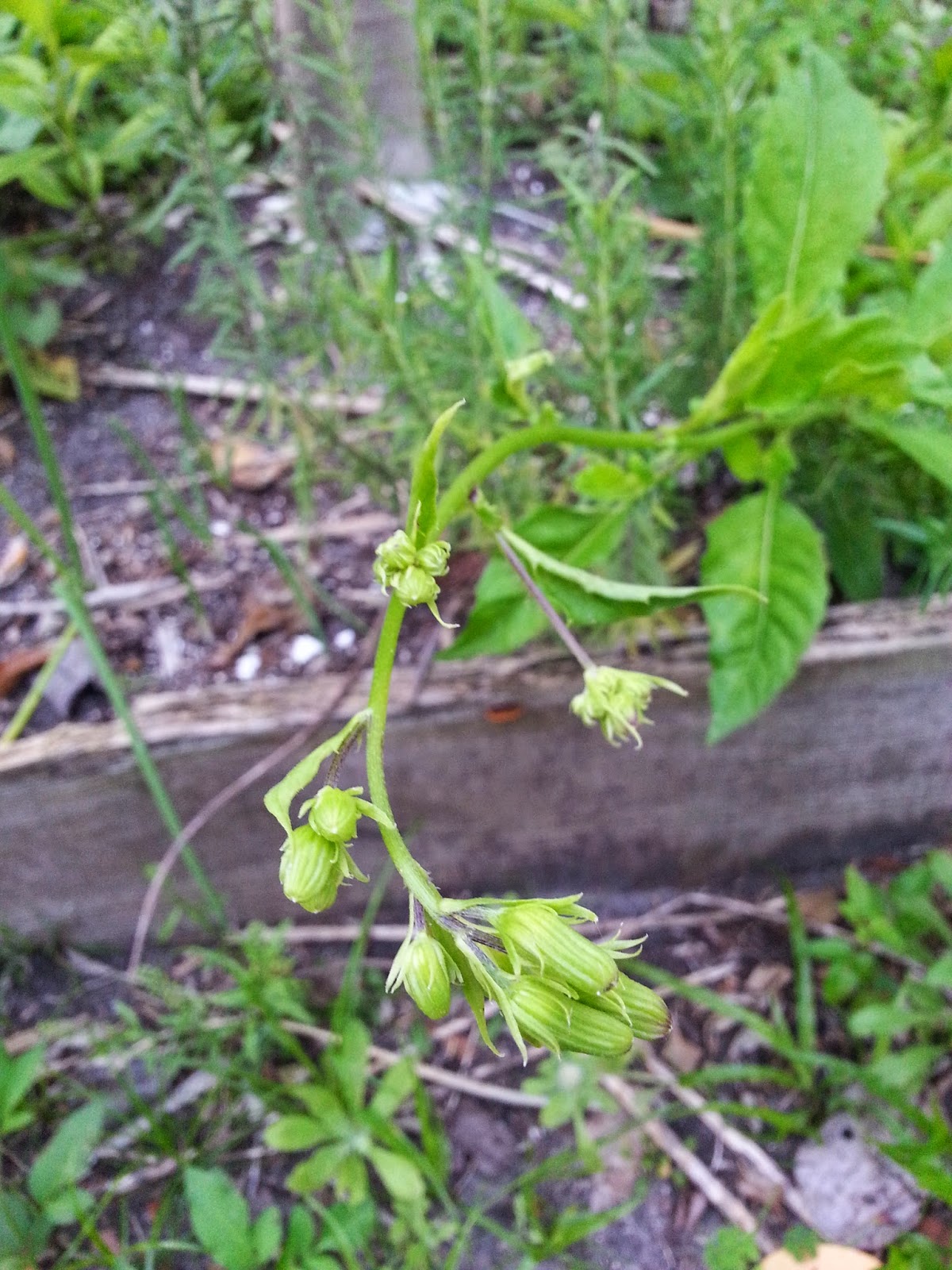 It was hiding in my Rosemary.  Very nearly missed it.

My pigeon peas are still going crazy - lots of pods and still flowering like mad: 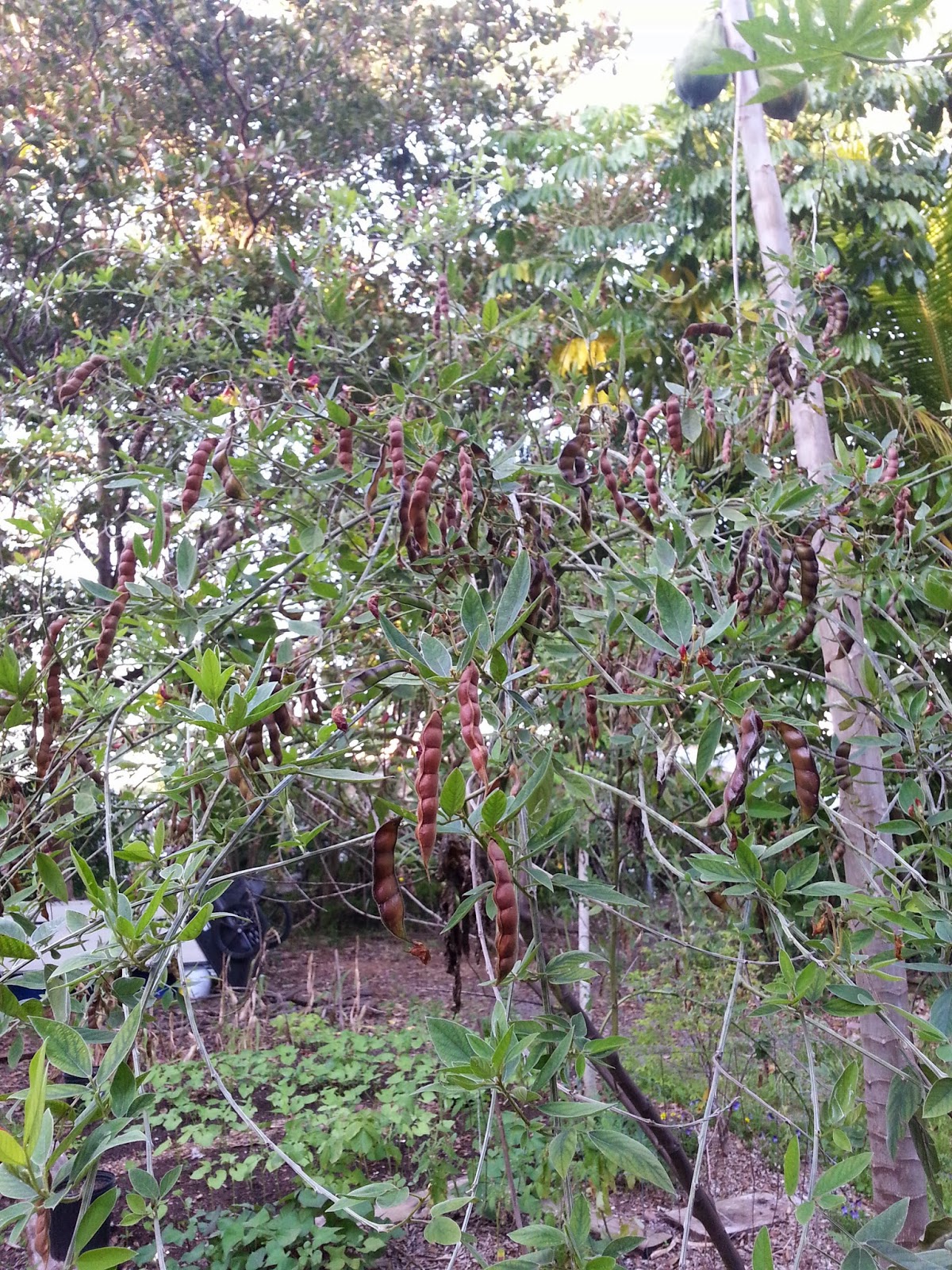 I've tried several times to get a picture that shows how large this pigeon pea bush is but I just can't capture it.  Of course it might have something to do with the fact that I'm an idiot with a camera(phone).  There's too much other greenery in and around it to sort it all out.  But you can see the brown pods all over the place.  I've filled a pint jar so far and I'm fairly certain I'll get at least another pint of dried peas this season. Meanwhile, I have 3 more plants just coming up and if the other seeds I've planted come up as well, I'll end up with about 8 more plants, in addition to the 4 growing now.  That should do the trick!

My weed gaillardia patch is still alive and kicking.  I will get around to pulling it all up and planting something edible here.  Eventually. 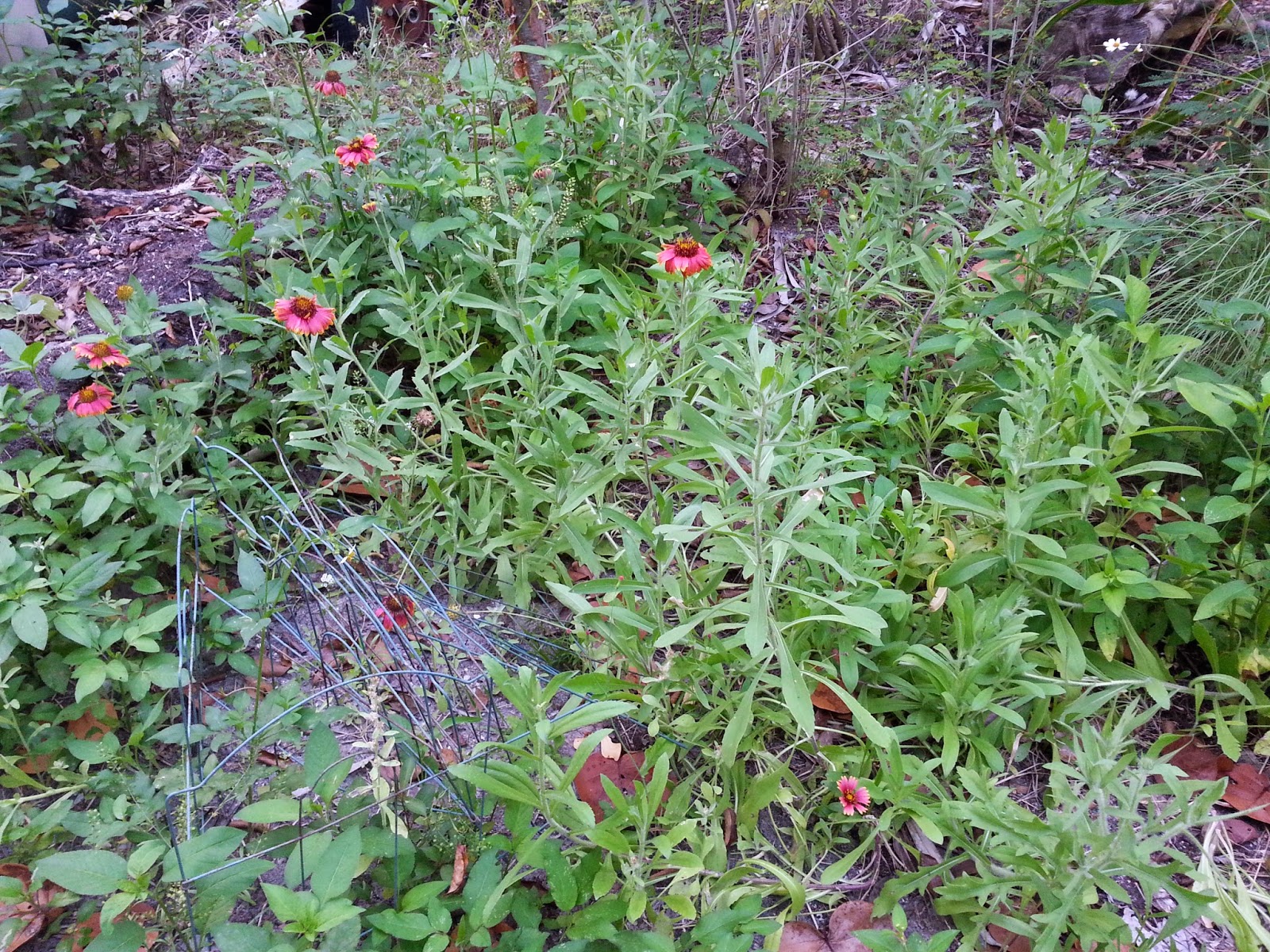 And these salvia are starting to come back to life.  I didn't have the heart to pull them when they stopped blooming.  Love these! 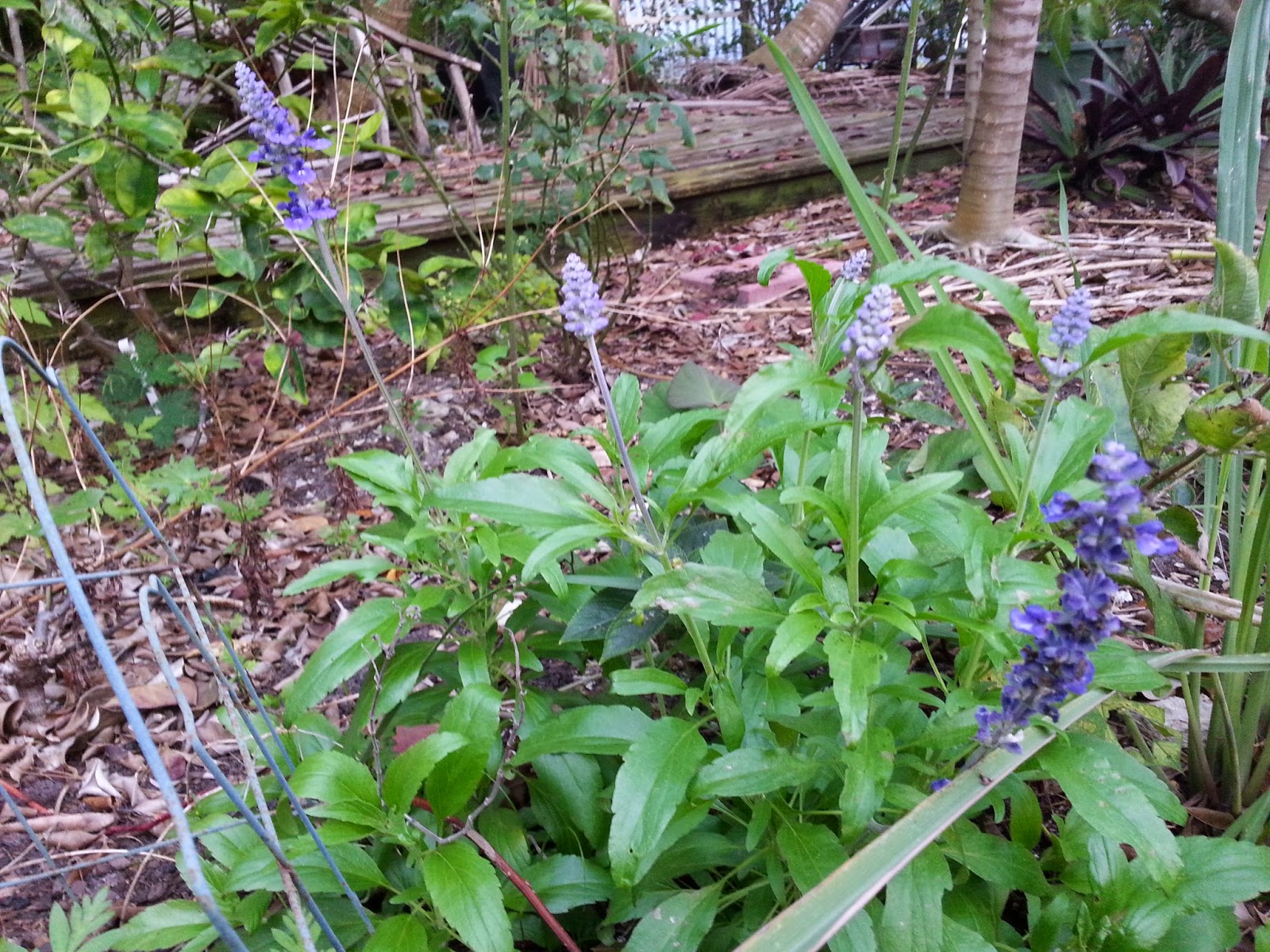 My corn didn't do well, unfortunately, so I pulled it today.  This area doesn't get much sun and the corn didn't get watered nearly enough.  I have an experiment in mind for this little area though.  I'll plant a few Moringa and Pigeon pea seeds on the north edge, and longevity spinach and vegetable amaranth in the rest of the bed.  I think it will be an interesting experiment!  These are the plants I love best in my garden.  Just set 'em and forget 'em (mostly).  And they'll grow through the summer.  Win win!