One Saturday in March, 2012 we bought 4 Black Australorp chicks for $1.75 a piece.  The kind elderly man we bought the chicks from showed us his "girls" and talked quite a bit about how they're the best egg layers he's ever raised and he'd been raising chickens for 40 years, etc.

We kept them in the living room in a clear plastic bin so we could keep an eye on them. The dogs were very curious, and enjoyed keeping an eye on them too. 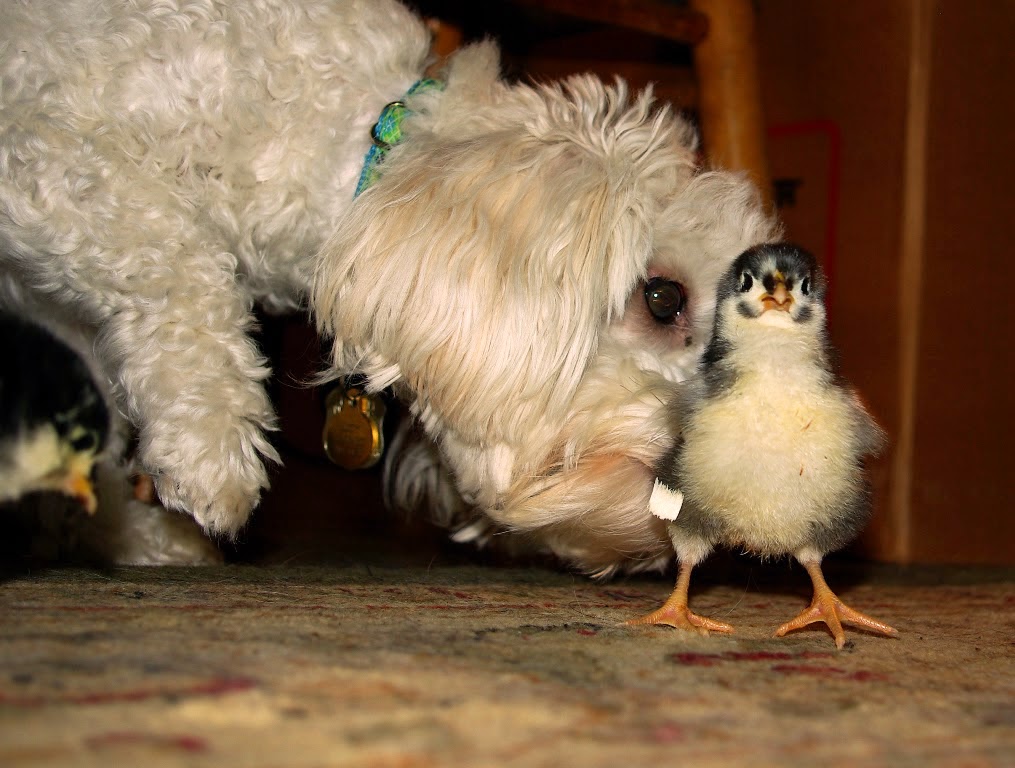 At some point we had to move them to larger quarters so we put them in an unused dog crate.  That was a bit premature since they kept walking out between the slats and running around the living room!  I'm glad the dogs weren't phased by them or didn't try to eat them.  Although they really weren't "that kind of dog". They just followed them around.

We built them a long bottomless cage so they could get outside and poke around the grass and run around.  But one day, while we were in and out of the house going to get a drink or whatever, a big snake got hold of one of the chicks.  When we found it, it was dead and clearly had been smothered by a snake.  It was obviously too large for a snake to eat so he had to spit it out.

And Then There Were Three (Chickens).

Meanwhile, we had built the coop and A-Frame run.  Shortly after moving them into their new house, we had "the fly" problem.  We tried fly strips and fly traps but nothing was working.  It was horrible.  How could 3 chickens make such a mess?  So we consulted the interwebs and hubby came up with the diatomaceous earth remedy.  WOW!  That stuff is awesome!  Worked like a charm within a week or so (to break the cycle).  All I needed to do at that point was put a little in their food and water and sprinkle the coop and run when we moved them to a different area of the yard.  Brilliant! Crisis solved.

I don't recall how old the chickens were, maybe 3 months old, but at that point one of them started making ungodly noises.  It took us the good part of a week to figure out which one was the culprit.  So the next morning, a Saturday, we went back to the chicken man and asked how to kill a rooster.  He gave us some tips and wished us luck. So then we went home and spent quite a lot of time on Youtube watching videos of the process. The next day, we got up the gumption and did the deed.

And Then There Were Two (Chickens) 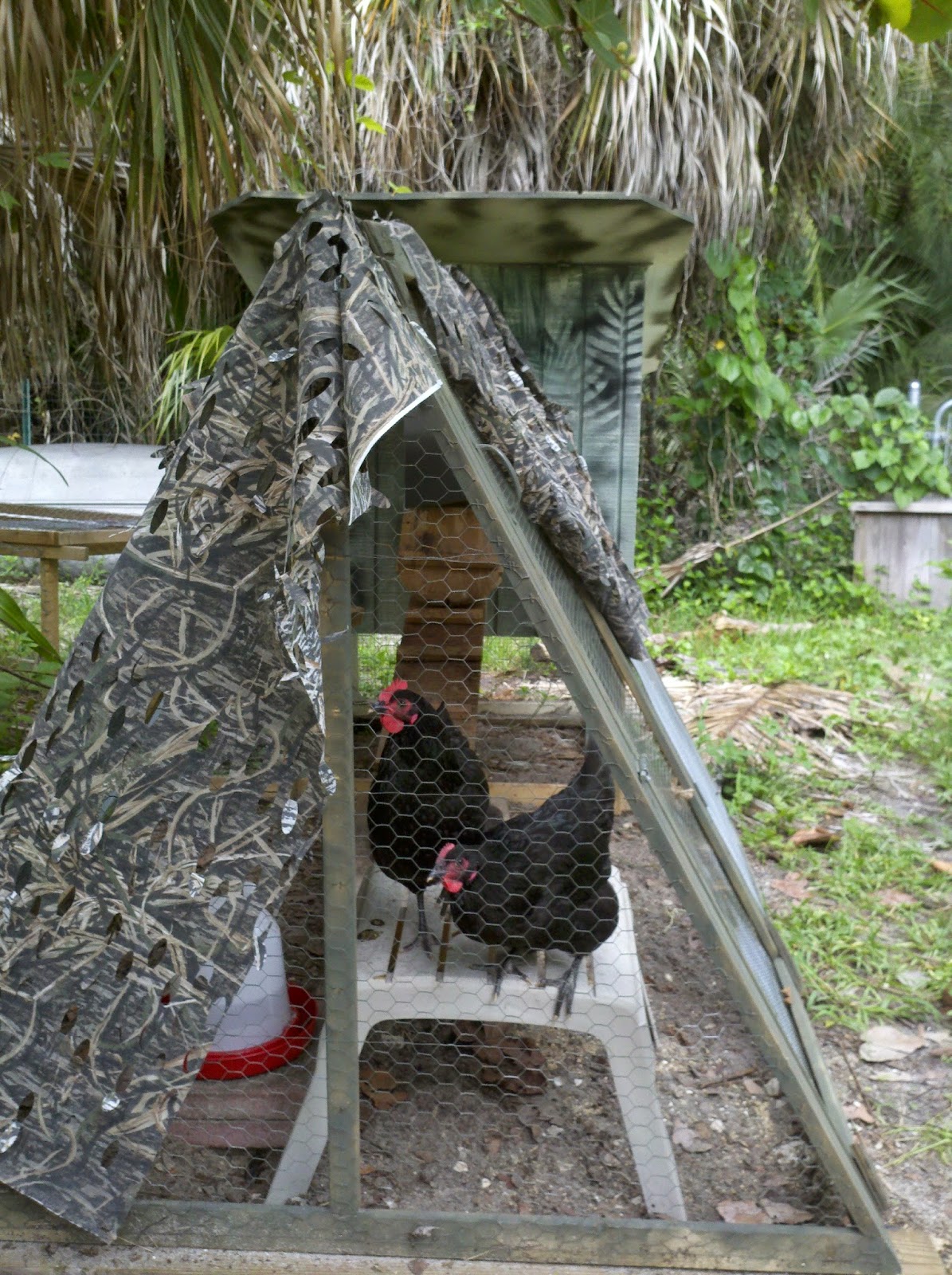 Right from the start we only wanted two hens but the chicken man said we should double our chances and buy at least 4 chicks.  So in the end, we ended up with exactly what we wanted. And boy were they great egg layers!

In the early days, the chickens learned pretty quickly how to get down the (rather steep) ramp from the coop to their run, and if they were running around the yard they always went back to the coop to lay an egg.  With great fanfare!  Squawking all the way!  We didn't have anything special inside the coop for them to lay their eggs, they just always picked a corner. We also learned that they needed light in the vicinity of the coop during the winter months so they would keep active the length of time needed to continue laying eggs.

We'd let them run around the yard if we were home.  They were in chicken heaven back there. They were a riot to watch.  I bought a corn grinder and would buy whole corn (stayed fresh longer) and I would give them cracked corn with their feed, which they LOVED!  I could get them to go wherever I wanted if I had a cherry tomato in my hand. It's how I lured them back to their coop whenever I needed them back in.

We weren't able to do much in the way of gardening though without putting up fencing or some sort of barricade.  It was a bit of a pain.  If they wanted something, they'd find a way to get around our barriers by simply barreling their way through.

They also hung out on the deck and patio a lot, which always led to lots of poop in places you didn't want poop!  They liked to hide behind the dog and sneak in when I'd open the sliding glass door! 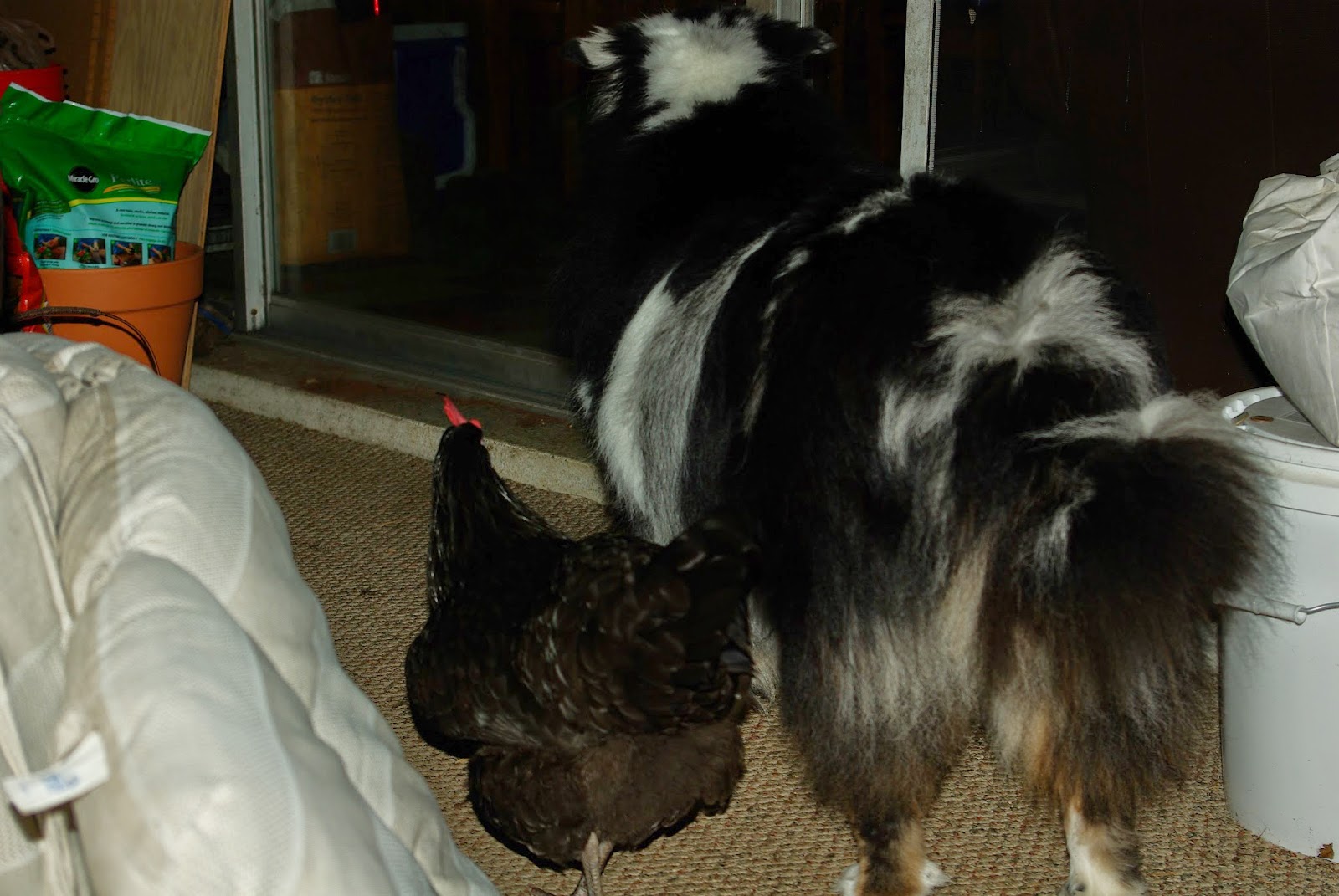 When they were about a year and a half old, one of the chickens was attacked by a hawk and died. The hawk wasn't able to lift it away, they were heavy birds.  But it must have gotten it off the ground just high enough that it killed the chicken. We only heard the squawking and then saw the bird laying on the ground.  We were really bummed out. Things were going so well!  We had figured out how to raise chickens!

And Then There Was One (Chicken)

The last chicken was so lonely it would just squawk all the time and if we let it out it would just sit by the sliding glass door making ungodly noises (rooster like).  It got progressively louder and we were worried the neighbors would complain.  A friend of ours works for a man who raises chickens and he said his boss would take her. So after two more weeks of noise we took him up on his offer.

Overall it was a good learning experience (except for the dead chicken bits). If the coyotes ever leave the large acreage behind us (they moved in shortly after we gave away the last chicken) we might decide to raise chickens again.  I would definitely get black australorps, but I also want to raise Pekin ducks.  I have to shamefully admit, I am absolutely terrified of chicken FEET!  They totally creep me out. I never got over my fear and I couldn't hold the birds once their feet matured.

I figure if I can raise chickens anyone can! All you need is some sort of coop/run, food, and water.  But don't forget the diatomaceous earth and light for the winter months! They are just as important! Oh, and watch out for snakes and hawks!
Posted by Sheila O at 6:57 AM